This bathhouse was built in the second half of the 19th century for leisure and hydrotherapy treatments. It’s a truly beautiful building that contained 54 baths of various types. Initially most bathtubs were made of copper but nowadays they are gone. Possibly they were replaced by fiberglass ones as we did find a few of these. The two storey high entrance hall in Neo-baroque style is especially impressive. The building should have been renovated in 2003 but it never happened.

Though the building has been visited by a lot of explorers lately and it became pretty un-original, I’m still glad that I could see this beauty with my own eyes. 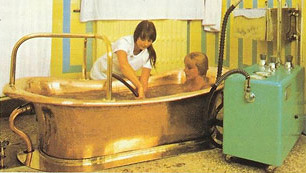 A woman being bathed here in the 70’s.
[Show slideshow]